Amber wants a dating scandal, with a male idol for once. f(x) member Amber Liu recently debuted as a solo artist with her first mini-album, Beautiful, and during an interview with Arirang Radio, she discussed her dating rumors with female idols like 4MINUTE's HyunA, Girl's Day's.
Table of contents

Please re-enable javascript to access full functionality. Posted 07 May - Amber and Ellin are so cute. Their friendship is super cute. I wonder which one is the best? Berlin is difficult to search, y'knoe hahaha Despite of what relationship they are having, let's support this cute friendship. If this was between a female and male idol people would be so fast to jump to the conclusion that they're dating. But just because they're two girls people will say "They're just friends" People are so dumb I can't. That wouldn't be a big plot twist. However I don't have an opinion on whether or not they are dating.

I just think their relationship is really cute. They really are cute together. I voted for the first two options. Can't help but wonder if they are dating, though. Omg I had never seen this. What about a rumor that wrongfully accused you of something, or that was unfair? She then told a story about when rumors mistook her for a man in pictures with 4Minute's HyunA, during HyunA's Troublemaker project duo promotions.

Because of Amber's fashion sense and the fact that she was wearing a hat in the picture, she was mistaken for HyunA's date rather than a friend.

People say that I look like a boyfriend, that I can take care of people. I'm trying to piece it together in terms of the Berllin timeline. Wasn't the award show after the dating news, though? If you think Amber and Krystal are dating why would she say "I'm happy for you? Unless they were talking about something totally different than what we think they were.

I mean we don't have any concrete proof that's what Amber even said, so it's all up in the air. I'm glad you described Amber and Ellin's relationship. I didn't really follow Kryber during RL I had recently discovered f x and hadn't fallen for Kryber yet so I didn't pick up on any of their problems or Amber's relationship with Ellin.

I've heard people talking about Ellin before, but I didn't know it was too this extent. It sounds like they were being pretty obvious about their relationship. Being a Kryber shipper during RL era would have killed me lol. Seems odd that they cancelled the last week of promotions just because Sulli was "officially" taking a break as opposed to her unofficial break the prior week. I had attributed the cancellation as f 4 supporting Sulli's decision to take a hiatus and not wanting to perform without her, but who knows!

Crack theory, just for fun: Sulli knew Kryber was having problems and used herself as a scapegoat to cut the RL promotions short so that Kryber could work out their issues away from the public. Sent from my Z using Tapatalk. You're really that new of a Kryber shipper? I thought you'd been around for ages!

But yeah Ellin was appearing on Amber's shows, social media profiles, and in one or two sneaky, photos of the two hanging out alone. Kryber was really scarce at that time, and it sucked. I tried to get into Berllin as a kind of replacement Kryber, because they at least seemed cute together, but no kpop ship has ever nor will ever get me excited quite like Amber and Krystal. So when Ellin kind of faded into the background I didn't notice too much, until she randomly popped up on WTP and I wondered where the heck she'd been at.

She still hasn't been mentioned after that, which is interesting. Ordinarily we would dismiss them, but this was during the time where every single blind item that was created was coming true. Granted that doesn't mean that this one was true, but I think it makes it somewhat worth looking at.

I do understand what you mean, though. I think it's a nice idea and one I'll be mulling over for a bit. No more discussion needed ladies and gents, this is the real reason Red Light was cut short. I still want another dystopian era concept, the girls rocked it, and I selfishly feel we were robbed of one of their best comebacks. Red Light was winning awards left and right, and I know Sulli needed to go, because she was unhappy, but I will forever want more of that.

It was so good and inspired me to write something and I just want to imagine them kicking actual ass and I think that after Red Light things changed and while they may be comfortable enough to be friends and flirt a bit, but the interactions aren't the same. I will caveat this and say that maybe it's due to the fact that they're older now and know how to hide it better and possibly me too, since I've been shipping these two so long and that I'm not as Kryber crazy as I was a year or two ago, but their interactions seem different, like less romantic.

Like I said, I don't know anything about him or Exo and, since I'm not interested in the group I have no reason to learn more about them and the members. Given how much Amber changes her story about her dating life I get why she does it, so no one attack me, but you can't deny it changes almost every damn time she talks about it I'm not sure anyone should really buy into what she says on that subject, though it may be our only evidence.

I think it's weird for people who are together to say something like that. I'm not denying there are convenient little things around Kaistal that could make them seem like a fallacy, but I'm still going to be cautious and believe they're a couple even if it's by an admittedly small margin. Wasn't there a blind item going around saying that hinting that f x , not SM stopped promotions, because they didn't feel right promoting as four and that they were willing to wait for Sulli?

This was from the same day. That awkward pat on the back around 1: One thing I've noticed about Kryber is that they never do that play kissing thing most idols do, at least not on camera. My main theory about RL is that that was the time Kryber broke up.

My second theory, which I feel is less likely to happen but still completely plausible, is that someone had feelings for the other and confessed and the other didn't take it well. This could explain why they were extremely awkward around each other. A more detailed and fanfic-y explanation would be that Amber confessed to Krystal, who feels the same way but is scared of the possible repercussions of them ever being in a relationship, unintentionally reacted harshly.

She tries to explain herself to Amber, who is heartbroken and won't listen. The situation leads to months of awkwardness and then after Krystal fainted, Amber realizes that even though she is heartbroken, she still cares for Krystal as a friend and they talk it out and everything's all good again.

I honestly don't know what to think of Kaistal. I'm still clinging to the hope that it might just be a coverup but it's at this point I'm pretty sure they're legit. Although the whole "I'm happy for you" still is super suspicious but knowing Kryber it could've been about something as trivial as:. I finally finish replying and there's already two more replies, I love how active this thread is becoming. There's so much I agree with here specifically that Kryber interactions, while still adorable, doesn't give off the same vibe as they used to, now they just seem like good friends. The award show was on March 31 while the dating news release was April 1 so Krystal probably knew about it and was telling the girls.

But I guess Sulli just couldn't deal with being an idol anymore and I don't blame her, especially when she wasn't supposed to be one in the first place and her heart just wasn't in it anymore. I'm glad she and the girls are genuinely happy now, even if it means they won't stand on the same stage ever again. Although it would be fucking awesome if they all performed La Cha Ta one last time the day before they disband hopefully that day never comes but that's just wishful thinking.

Hey, you know that kernel that's been stuck in my teeth? I wasn't into kryber in Red Light era. It was easy to backtrack timelines of all the positive kryber eras but all i really knew about RL was that it was cold These other awkward vids are breaking my heart. Posted 03 August - Signal ya i saw it!! It looks like SJ thought amber was going to walk with her but not. SJ stopped walking after knowing amber not going to walk with her. You went all out Thanks for screencapping the tension.

I loved the intro, when Krystal barks into your ear. Oh my gosh, my eardrum was ringing after that. We have a very interesting relationship. She likes to bug me and I like to bug her. But I also wanted to show, a lot of people have that perception that we're all these "serious celebrities," but there's definitely that fun side and we owe it to the fans to show them that. Posted 04 August - I'm just glad they're fine now.

You went all out Thanks for screencapping the tension Fuse Interview: Made my first and probably last lol Kryber snippet to All Mine. Hope you guys like it! Your fmv gave me so many feels. I found the video. That's actually interesting how it could have been referring to kryber's situation.

But I don't know whether the dating news have influenced the way I interpret things nowadays. Cos during the 4 Walls Era the vibes I got from them were quite good. There were actually quite some situations, where I thought whatever happened in they've got over it, like at the Halloween Party. 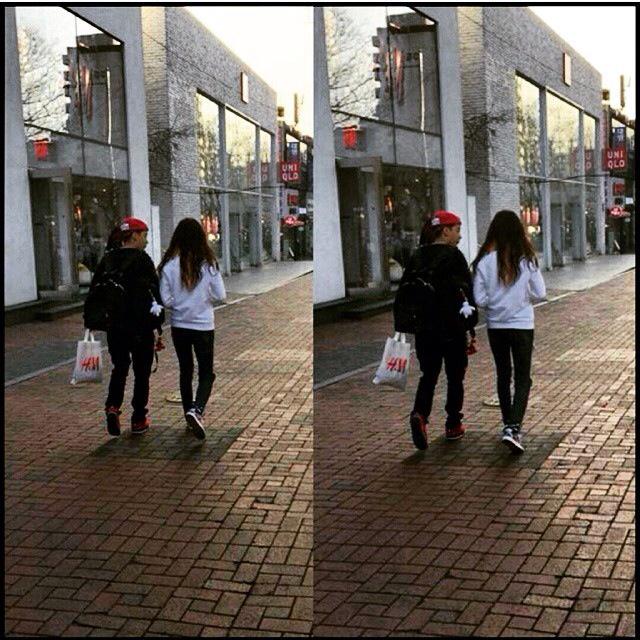 I mean until the 1st April I didn't mind and even think about why Krystal was actually clued to her Phone. I don't know if I have missed sth. She was not like that before. After the dating news I just can't help myself to think that she is always on her phone because of this guy and I don't even think that the dating news are real.