I regretted it hugely and didn't tell anyone in the office. I left the job a couple of months later. I definitely see the funny side of it now but I would.
Table of contents

This was a dumb sex thing with my boss, sure, it was probably irresponsible, but I was responsible in more than enough other areas of my life to make up for it. The roughness of his touch coupled with the pleasure in his eyes and in his voice. I walked to his desk and perched myself on the edge of it, trying my best to look sophisticated. He placed one hand on my bare thigh rubbing it, dangerously high. I glanced back at the open door, no one was due in for a bit longer, but that what if someone came in early?

And yet… I could also feel my worries being drowned out by another voice inside me that was praying his hand would keep moving. He bit his lip. Feeling awkward about just standing there while he touched me I leaned forward to kiss him. I gripped his chair for balance as keeping upright on my own was becoming increasingly difficult.

He pulled his hand out of my and placed it on the back of my thigh. He looked at me and I nodded, pulling my skirt down as far as it would go. I turned to leave his office until the appointed time and was dismissed with a playful slap on the back of my skirt.

I returned to my desk and waited to be summoned.

A member of the choir, but never a soloist. Sign up for the Thought Catalog Weekly and get the best stories from the week to your inbox every Friday. You may unsubscribe at any time. By subscribing, you agree to the terms of our Privacy Statement. Dedicated to your stories and ideas. Will they ever meet? How would his father feel?

How would my son feel? Life has gone on and my son has only ever bought me joy. He is a product of an affair, illegitimate and unplanned. Yet this has never been an obstacle in his life or prevented him from being the intelligent, kind, funny and successful young man that he is. My heart has ached over the years but now it has healed. I cheated on my boyfriend with one of the managers at my old job.

I ended up breaking it off with my boyfriend and marrying my manager! He also made my time there absolutely miserable so I quit and found a new job: When I got my first job after uni managing a small country pub , I had a few female co-workers.

One I fancied like mad but she wasn't interested. Another was young and impressionable, and I'll happily admit was infatuated with me.

We often shared drinks after work and spent the nights on the sofa in the bar. I've slept with a co-worker. We were in college, we had all the same friends and [we] hung out after work. One night after a handle of vodka the inevitable happened. In fact, it happened about four times that night.

And then every day after that.


We broke up a few weeks later. Working together was so awkward. He brought another girl to work one evening and I freaked out a little. We got back together. Our relationship was against company policy, so we had to keep it hidden, even from our friends that we saw every night.

We've been together eight years and got married in February! I am very conscious about keeping my personal and professional lives separate.

Spending a lot of time with someone, the flirting lines blur, I guess I led her on now and then, asking her lots of questions, joking about personal stuff. I followed one of her Spotify playlists, I was the only one following it. This stuff is all subjective, she may have done it on purpose, who knows, she may have just changed the name for no reason. I look back at myself in that situation, wishing I could reach in and slap myself with the sense to see what I was playing with.

There were three of us, a couple of wines deep. There was another guy there, he had a couple of young kids and left after the first bottle, we decide to push on and try and finish the presentation. A project that seemed so important at the time, yet now so ridiculously insignificant. We were sitting pretty close at points, going through some papers, now and then one of us would get up and write something on a whiteboard. 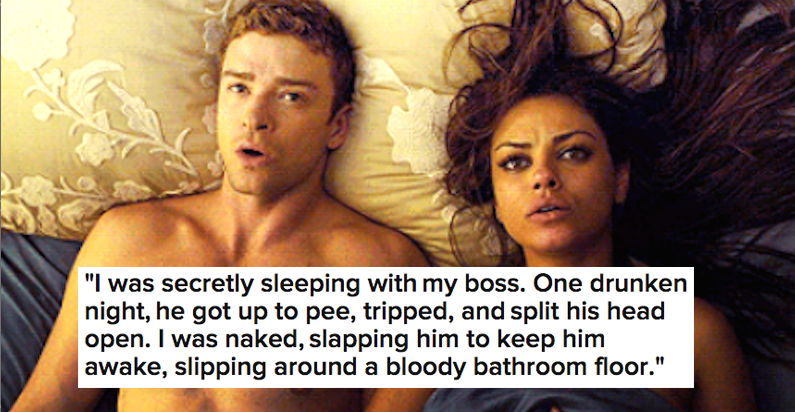 I could smell her and kept getting these open looks down her top. I think she had an extra button undone when she came back with the second bottle, maybe she sprayed on more perfume, either way the room got much more intense. You are drawn into the chemistry, its hot, it builds then you shake it off. There were these three columns of stuff she was adding to the white board.

Dedicated to your stories and ideas.

When she had to write at the bottom of each column she sort of stepped back and bent right over to get down there. She did that thing that women can do in heels when she arches just above her hips so her butt kind of sticks up. It was summer so she had bare legs and a reasonably short skirt.